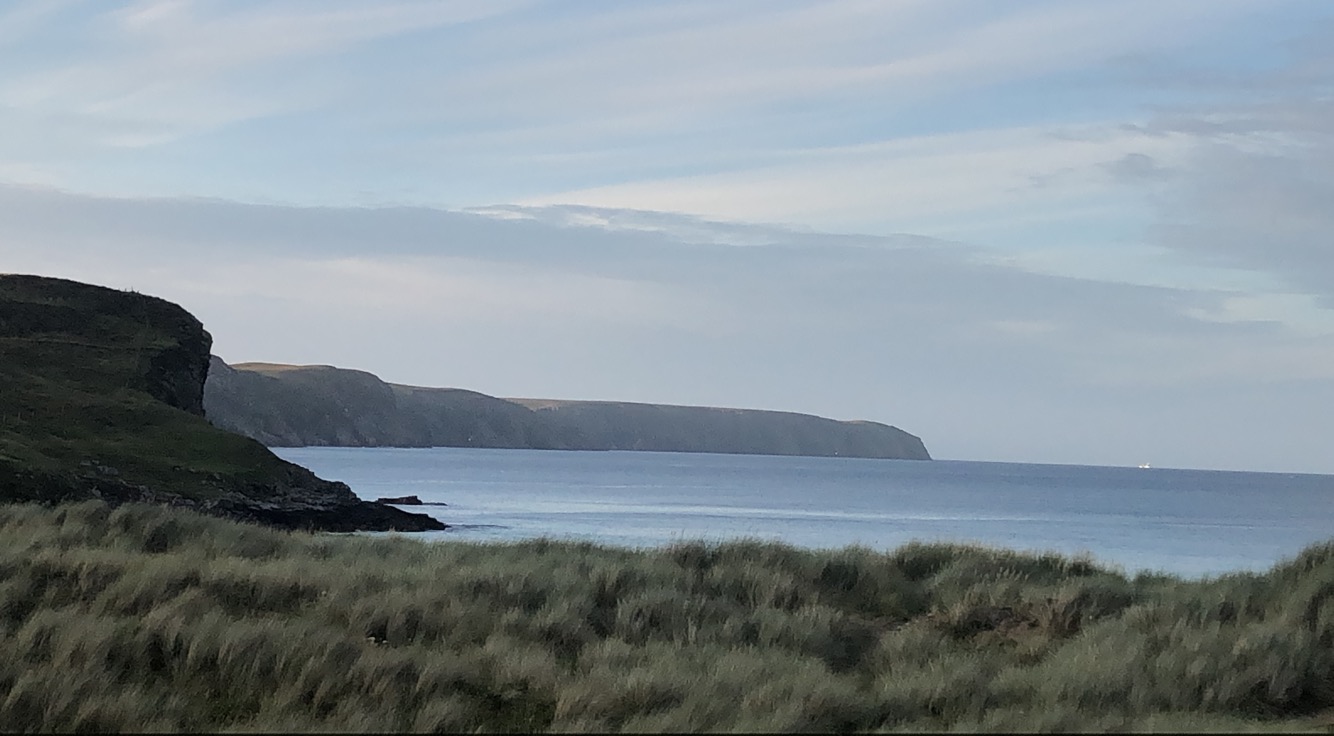 An impossibly vast carpet of blue melted into the distant horizon, the cloudless sky bleeding almost imperceptibly into the water. From here, the sea appeared everything that was. Coated by a shimmering sheen, the waves had journeyed thousands of unbroken miles to visit the cliff face, which stood quaking at the land’s end. Now glistening, transparent, tranquil water, imbued with the glowing sun, caressed the sore and jagged cliff face, foam tendrils leaving delicate strokes like an enraptured lover. Tingling at the icy touch, loose shingle mounds at the cliff’s base betrayed its inevitable fallibility. The low thunder of their collision echoed a soothing lullaby across the land.

The sun boiled with envy at their closeness. His grasp on the day slipping, he tumbled into a reckless descent, scattering a hazy orange dust, which suspended brilliantly above the water. Transformed, the expansive swathes of grass covering the land like a thick fur shone vividly golden in the resolute light of dying sun. Frustratedly clutching at his domain, arrogantly lashing out and ceding control with mocking scorn, the sun unleashed flashes of bright crimson, ripping across the water and staining the sky with wrathful, lingering violence. Unperturbed, the sea sustained its crashing melody, as fire rained upon the land. Amidst the grass, a perilous whisper crackled with anxiety, snapping through the long stems. Shrieking with urgency, a whistling wind suddenly announced through an immediate explosion of noise, an unwanted arrival.

A creature, clumsily stamping through the helpless blades, greeting the land’s organic undulations with yells of indignant bluster. Boorishly blundering forwards in mighty kicks and heedless stumbling, this creature now arrested the attention of a dormant foe, determined to preserve the sanctity of this precious enclave. A towering, imperialistic beast, uprooting their native slumber. In first a steady trickle, midges surged forth in a rapid flood of collective insect bodies, ensconcing the creature and drenching its clothing in a veritable storm. Wildly beating about, embroiled in conflict with the air itself, the creature fell into the grass. Still materialising, these drones soundlessly nestled upon fabric and skin alike. Wailing with unrepenting ire, the creature pitifully succumbed to the inevitable onslaught, hurriedly slinking back in retreat, leaving in its wake an ugly scar of matted, crushed grass.

Under a sky newly painted deep purple, the midges renewed their faithful guard. Though vanishing from this plane of existence, they lurked below the still air. As the moon arose in her vacant beauty, she wept in solemn vigil for the tarnished land, droplets of her soul pouring over the grass and transforming it an ethereal white. Clustering together, peering through gaps, the blades of grass nervously watched their fallen comrades, trampled into the soil. Slowly, inexorably, in desperate, fleeting bursts of will, each blade rose, cheered by the wind and the sea. Only the moon remained silent, though smiled inwardly. For within her depths, behind an impassive façade, curled the entire history of the world, cosy and tamed. It would always live on.

Thanks for reading! I wrote this story last summer, inspired by my wild camping adventure in the Outer Hebrides. In many areas the midges proved fierce, though it was actually more a problem on the mainland. My intention here was to keep it short and poetic, capturing the natural beauty of the untamed wilderness that persists. This post also appeared on Tales from a Tent.

I regularly post other short stories, travel blogs, or interesting historical commentaries, so stick around and explore more!

Fairfax blinked away his surprise. I had never asked for help before. Clearly, something was wrong. It had been building for far too long. He might have possessed an inkling of my struggles, but knew far from the entirety. Which, of course, had been a deliberate precaution. In that moment, however, I had resolved to… END_OF_DOCUMENT_TOKEN_TO_BE_REPLACED

For most fans, both of tennis and Andy Murray, his Wimbledon return was probably met with mixed emotions. More than anything, it was fantastic to watch him in action again. ‘Inspirational’ is vastly insufficient to describe his journey. An infinite number of accolades could be lathered over his career and never do it justice. But… END_OF_DOCUMENT_TOKEN_TO_BE_REPLACED

Despite the ongoing travel restrictions, I was recently fortunate enough to visit Costa Rica as a solo traveller. It truly is an incredible country, and perfectly suited to travelling, whatever your holiday type. Costa Rica possesses interesting attractions throughout its varied landscape, another feature ensuring travel is fulfilling. It’s possible to uncover hidden gems, exotic… END_OF_DOCUMENT_TOKEN_TO_BE_REPLACED

by Tom 26th Jun 2021
Welcome
Explore
Stories
Travel
About Me

26 thoughts on “The March of the Midges”